Final report on the conservation of a circular textile

Design: Wide border containing animals, with guard stripes either side. Centre design within the guard stripes depicting birds in flight.

Historic context; the rug is thought to have been made at the London county council college for the Furnishing trades, located in Shoreditch, London. It is likely to have been a student’s work (one off) which was abandoned after completing their studies at the college.

There were numerous complex problems involved with the textile including adhesive removal, cleaning due to unstable dyes, torn areas, display issues, aged degraded fibres, fibre loss and the client’s budget.

The client requested that the textile be hung upon completion, therefore the aim was to clean the textile, stabilise the degraded and torn areas and devise a suitable method for hanging/mounting the textile. Assessment of  the client’s property and respond to the environmental conditions in order to find the most suitable position in which to display the object to promote its longevity. 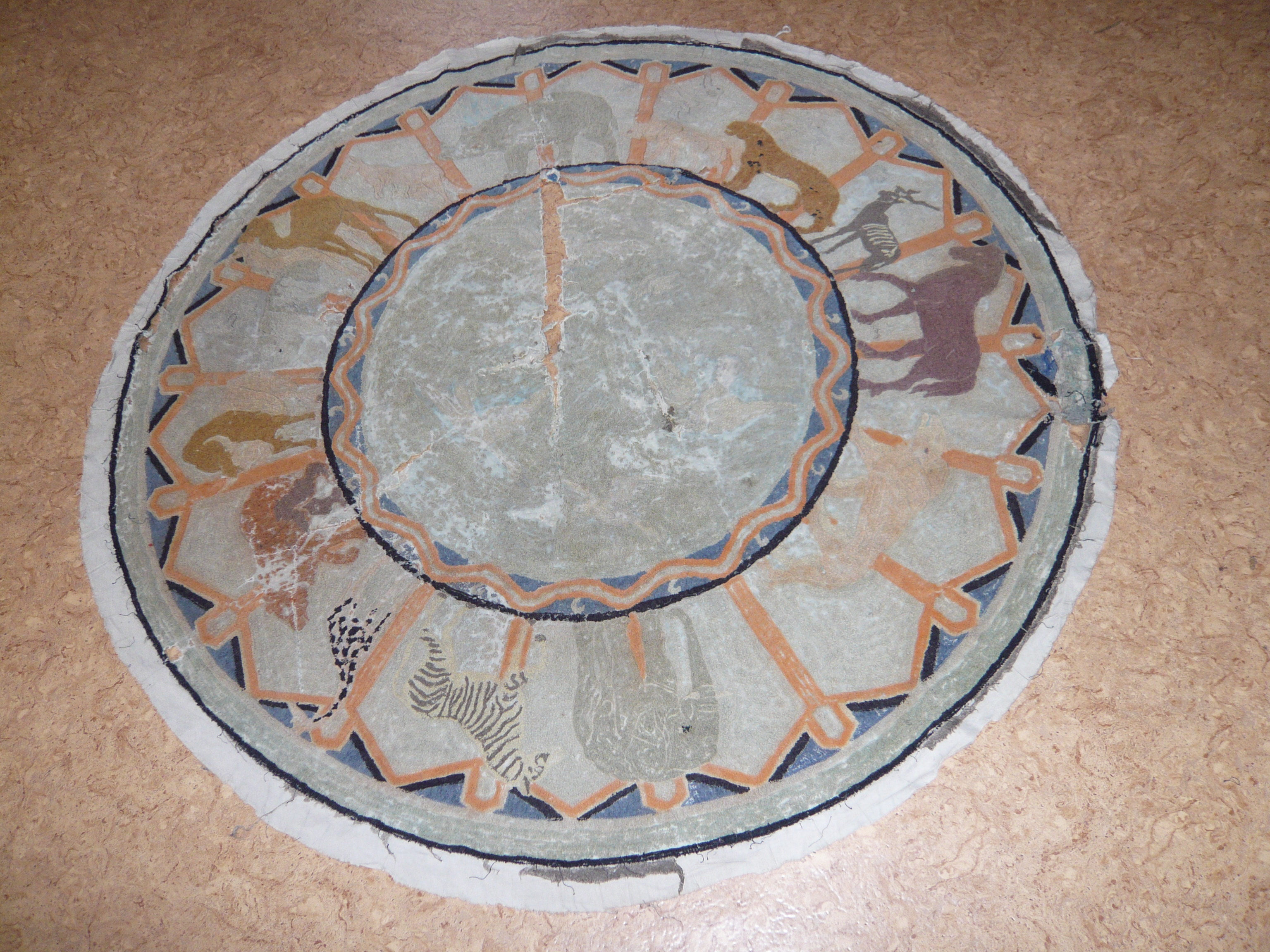 There were many old repairs throughout the textile such as adhesive patches, crude stitching to hold the tears together along with areas of more subtle stitching. Some old repairs consisted of loose threads no longer serving a purpose.

The raw edges of the textile were originally turned under in finishing. Some of the tears incorporated the area of these folds.

Due to the shape of the textile some creases inevitably form on the raw edges.

Upon delivery to us there were loose embroidery threads within the roll of the textile that were no longer attached. These were retained and used for later testing for dye stability.

There had been evidence of dye transference in the past. Tests were carried out as to the stability of each of the dyes for wet cleaning (Fortunately we were able to use the loose wool as described above). Tests proved that the dyes were not stable enough for wet cleaning.

Although sending the textile for flat bed washing would solve the problem of gaining wet cleaning results whilst avoiding dye transference, due to the costs involved this was not an option. Solvent cleaning would not produce satisfactory results for the cost involved. The only cleaning that was carried out was dust extraction using a vacuum on a low suction setting through gauze to prevent further fibre loss.

The gauze is mounted on a wooden frame which offers the benefit of methodically moving the frame across the carpet so that no areas are lost or overworked. 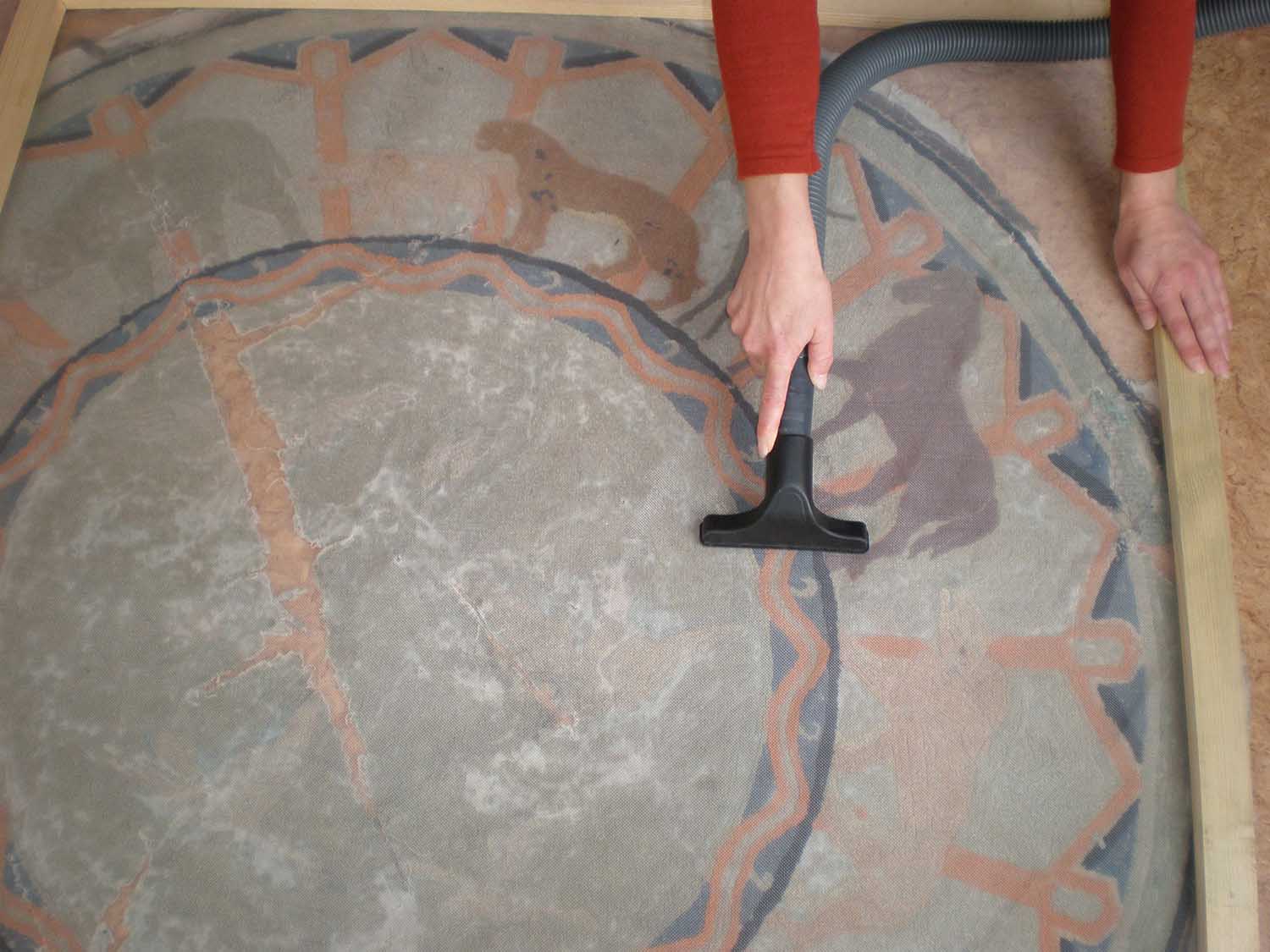 There were many old repairs throughout the textile such as adhesive patches and crude stitching to hold the tears together, and areas of more subtle stitching. Decisions were taken as to whether to remove old repairs on the basis of any harm being caused to the structure and alignment of the original textile and whether the removal of the repairs could potentially cause more harm than leaving them.

A few of the adhesive patches were barely attached so it was decided to remove these to use in experiments to find out how the adhesive responded to removal with solvents. The use of solvents proved a success so solvents were used on the textile to swell and soften the adhesive. This allowed the removal of surface residues with gentle mechanical action and then blotting was used to remove more ingrained adhesive and discolouration.

Old repairs were removed where unsightly,or causing harm or where they consisted of loose threads only which were serving no purpose. The repair stitching thread was retained.

Couching the areas surrounding the tears and weak areas was more appropriate particularly for the nature in which the textile was to be displayed. Experiments were carried out to determine the spacing of the couching stitch and weight of thread needed to ensure overstitching was avoided.

A decision had to be made as to whether to stitch the couching lines in the direction of the warp or weft. The initial concern about couching across the textile (with the weft) was that it could cause uneven surface tension resulting in undulation of the ground fabric, due to the weight of the textile and support; this could be harmful to the textile and would look unsightly. However, it was decided that to stitch in the weft direction would be far more effective due to the main tears being along the warp direction, and that the stitches were close enough to avoid the undulation of the ground fabric to any harmful or visible degree. The decision was made to carry out the couching stitch in the weft direction.

The shape of the textile caused a challenge in attaching it to a tapestry frame. The textile was too large and fragile to be framed in any other manner whilst still allowing access to work on the damaged areas in the centre. The support fabric and textile were attached to different beams of a frame (see pictures) to enable us to achieve a looser tension on the support compared to that of the textile, so that once removed the support cockles rather than the textile. Both the support and textile were attached to the front beam onto a long apron to enable a herringbone stitch to be used around the edge of as much of the semicircle as possible in order to achieve maximum support. The textile only (not support) was attached in the same way to the back beam while the support was attached directly to the centre beam. All had to be meticulously aligned in order that they roll straight when brought off the beams.

The couching stitch was carried out from the central most serious split first and then the rest in order of extent of damage. This was in order to use the time allocated from the customers budget most effectively (worst areas first) and there was not enough time to carry out couching to all splits. However couching throughout the textile was recommended for the strength and stability of the object.

When stitching further up the textile the herringbone stitching that was holding the textile to the apron of the back beam was gradually undone to allow access. The apron was supported in position in order to avoid the weight of the apron applying strain to the textile.

It was decided to remove the textile from the frame prior to couching the outer most holes as the tension from the frame could no longer remain consistent on the sides and some areas could not be tensioned in this way as they were small and contained old repairs that had come away, so needed more localised framing up.

The raw edges of the textile were originally turned under in finishing. Some of the tears incorporated the area of the fold, these were conserved with the couching to stabilise the fold. The edges were turned back as they had been originally. Due to the shape of the textile some creases inevitably form on the raw edges. Care was taken to crease the textile and support that was behind it in alternative places than where there had been creases in the past to avoid more strain in the areas where the edges were originally creased. Darts were cut out of the support fabric only to reduce weight and bulk which enabled the support fabric to lay flatter.

The ideal method of mounting the fragile textile was on a fabric and foam covered mount board. However due to the size of the textile this type of mount would have been too large, heavy and unwieldly to be practical in the client’s house. An alternative method of mounting had to be found that would support the textile, keep it flat and avoid movement. It was decided that the lining fabric was to be used to mount the textile by stretching it between two horizontal bars to hold the textile in position.

A visit to the client’s home helped him to determine the position in which the circular textile was to be hung.

Preventive conservation factors that were taken into account were:

Light from windows and artificial lights

Humidity – avoiding areas where extreme fluctuations could be a problem near entrances, windows and fireplaces

Although these factors had to be taken into account due to its size there was a limit to the positions in which it was practical to hang the textile without obstruction and avoiding areas where traffic could cause damage (e.g. someone brushing past the textile causing more fibre loss).

The old repairs that were unsightly or causing harm were successfully removed and these areas realigned and stabilised. As much adhesive as was possible without causing loss was removed. Safer solutions to these areas of damage were used to prevent further damage from inappropriate treatments.

Splits and tears in the textile were successfully consolidated resulting in them being less vulnerable to further damage and less obtrusive to the design.