A striking 1920’s Khotan carpet was recently repaired at our workshops. The carpet is full of charm with nearly the entire main field dominated by an enormous stylised lion…a quite fascinating character. 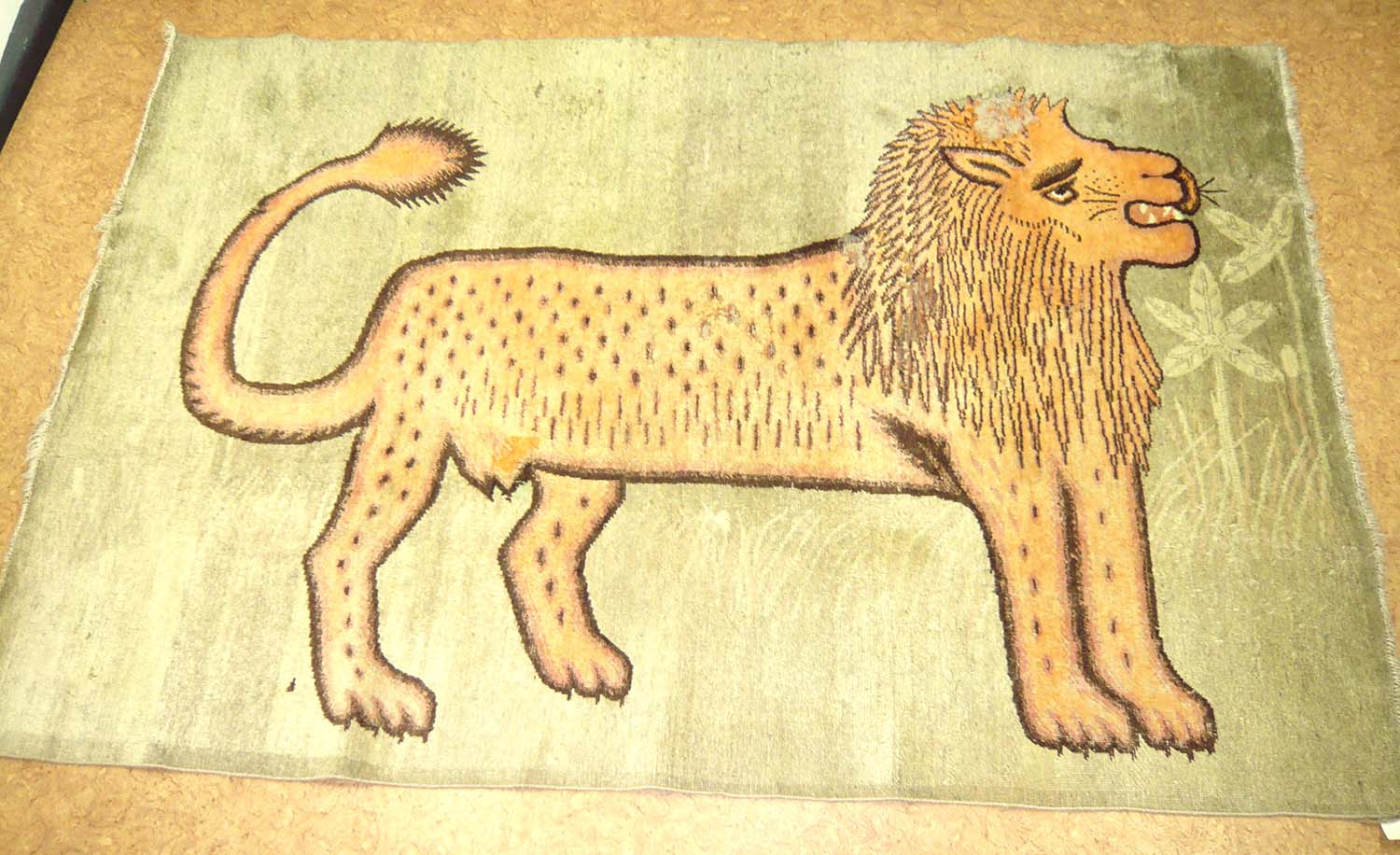 Unfortunately whilst in storage large areas of the rug had been attacked by moths, so the condition of the rug on delivery to us was of a slightly balding lion where the moth larvae had attacked the pile in order to gain nutrients from the protein in the wool. It reminded me of Aslan in The Lion, Witch and the Wardrobe! The cotton foundations had been spared as they are of no appeal to moths. The client already had heat treatment carried out to kill the eggs, larvae and adult moth. The client’s requirements included the cleaning, re-piling of moth damage and hanging the rug on display.

Insect pests are becoming an increasing problem, causing damage to rugs and carpets that is costly to repair. Climatic changes and central heating create the perfect atmospheric conditions for insects to breed all year round. There has been a withdrawal of many insect-proofing agents due to their carcinogenic properties, and a resurgence in the use of natural fibres in furnishings. As a consequence we have seen a considerable increase in the quantity of rugs brought in to us over the last few years containing insect infestations. Vigilance is the greatest deterrent, therefore carpets left undisturbed in warm, dark and damp areas such as in storage or partially under furniture are vulnerable to attack.

The cleaning of the Khotan carpet involved dust, grit, frass and cocoon extraction and full washing. In the majority of areas that had been attacked by moths the pile had been cleanly munched away leaving purely the back of the knot in place. At the edges of these holes the original vivid orange at the base of the knots was revealed.

In-filling decision – In order to retain the integrity of the piece it was decided to re-pile only the most dominant bald patches, as these had the biggest impact on disturbing the continuity of the design. The carpet was going to be hung on display so did not require full robust re-piling work as it was no longer going to be functional. The wool fibre, texture and colour were matched, and the moth damaged areas re-piled.

This technique, by its very nature of replacing missing elements of the construction, constitutes a ‘restoration’ treatment. However, it also fits quite happily within ‘conservation’ parameters of in-filling techniques that avoid harm to the original object, and reinstate the continuity of the design.

The decision not to re-pile all moth attacked wool was important to the client in fulfilling her ethical and aesthetic objectives. She appreciated that some of the rug’s history was evident from the smaller remaining moth-eaten areas where, for example, the intensity of the original orange dye was apparent.

A Velcro hanging system was used in order to distribute the load evenly throughout the length and breadth of the rug. Once in situ we discovered the rug was to be hung as a dramatic feature on a drawing room wall over looking a room filled with a collection of exquisite works of art all featuring lions. The lion rug created a wonderful finishing touch! 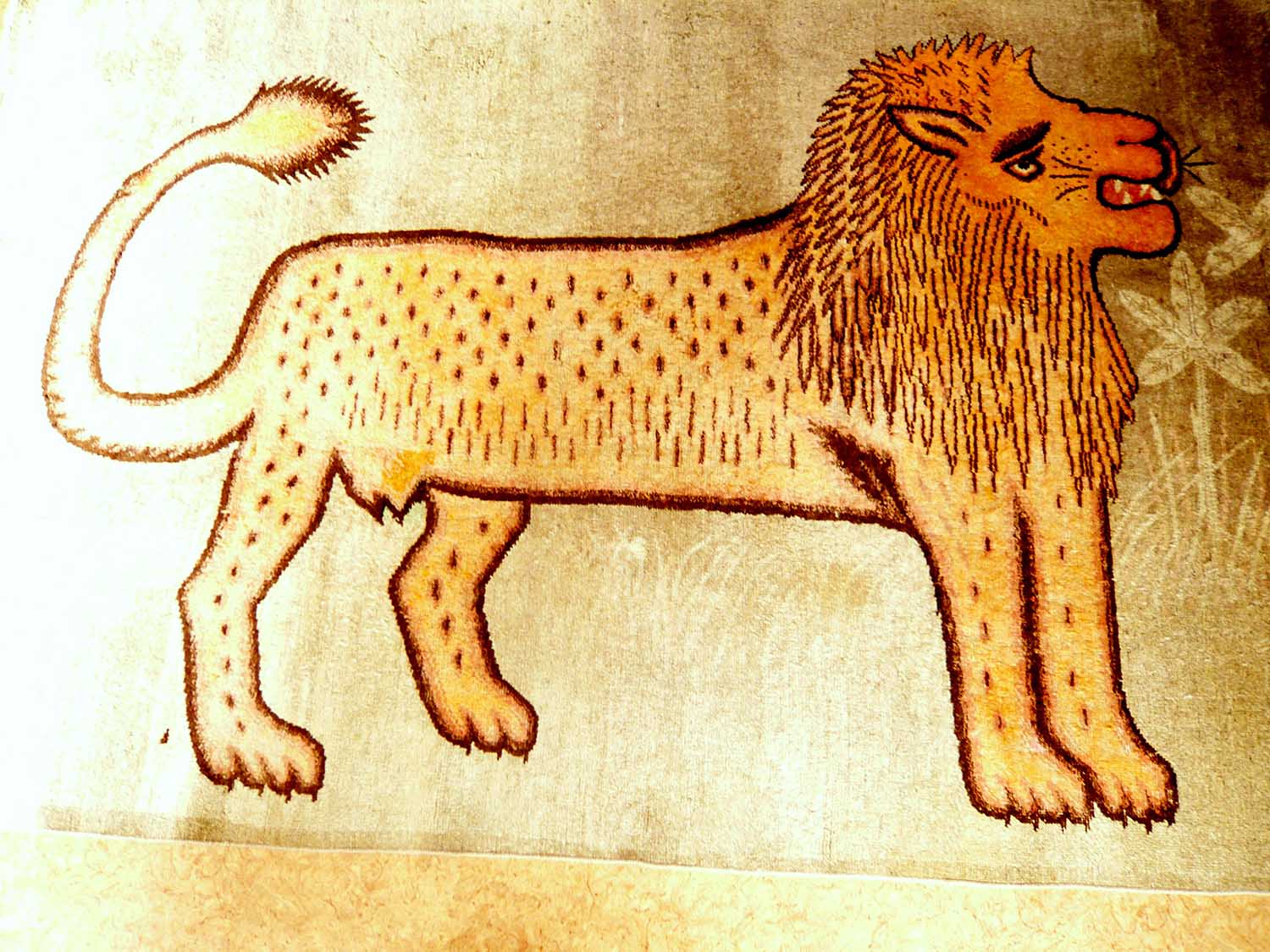