Conserving a Felt from Kyrgyzstan

Mrs Clarke had stored her felt rug for nearly a year and was unfortunately unaware of the damage that had been caused by moths during this time.

Moths love warm dark undisturbed locations to breed and the felt gave them nutrients to feed on from the protein in the wool along with soiling in the rug. Felts are particularly popular with lazy moths due to its loosely intertwined fibres which are easy to attack.

Initially the felt was treated to eradicate the insect infestation.

On testing the stability of the dyes unfortunately they were too fugitive to carry out wet cleaning. Therefore dust and grit removal was carried out with a low suction vacuum, through a gauze over the weak areas. Insect frass and dog hairs were removed with tweezers. Isolated surface residues were removed where possible.

Mrs Clarke adored her Felt not only for the aesthetics but it held sentimental value.

The holes that had been caused by moths were affecting the appearance to such a degree that Mrs Clarke enquired if we could infill these areas in order to restore the integrity of the design.

We agreed that the difference infilling the holes would make to the appearance of the rug would be considerable, so carried out research into various methods of repair. There is little written about the repair to felt textiles, partly as the values often do not justify lengthy conservation treatment but also as there are limited known methods for treating them.

On researching felting techniques I discovered details of a needle-felting process. Although this technique is not exactly the same as the wet felting process in which the rug was constructed. The principles of felting being the non-woven entangling of fibres were common for both practices. The techniques of precise needle-felting appeared to lend themselves much more readily to the restoration and conservation of the felt than the beautiful, but almost haphazard and clumsy results wet felting often produces.

Following a plethora of enormously helpful and encouraging emails from many international textile enthusiasts and conservators, once they had heard about my quest, I began trials with the techniques of needle felting. I thought initially that the process although appropriate, could be limiting in terms of the results I could achieve being consistent with the surface and quality of the wet felted textile. However I soon discovered that the needle felting technique was very versatile and could offer a vast array of effects that would be successful in matching the texture and finishes of the textile.

The needle felting technique involves the use of roving wool (fleece) which can be attached to either the textile or a support fabric when used for restoration. The wool is attached (felted) by the use of a barbed needle that is stabbed through the wool and base, joining or ‘entangling’ the fibres of the two together. Surprisingly little needling is required to create a strong bond. 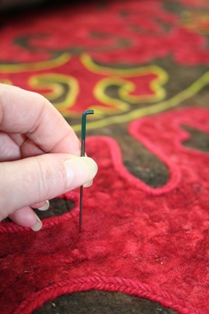 Techniques to achieve variation in finish:

Variation in the needle size; the smaller needles created a better finish in this case by avoiding visible perforations on the surface. Needling at an angle (approximately 45 degrees) also aided this.

Limiting the amount of needling resulted in a hairy, even slightly piled finish. While excessive needling created a very flat, compact surface.

Trimming of the fibres towards the end of needling leaves more uniform hairiness, caused partly by blunt fibre ends and by the uniform length of the fibres.

Varying the amount of needling and quantity of fibre used affected the density of the felt.

Other techniques used to perfect the appearance and textures were:

Layering-The wet felt was originally built up in two layers (which had unfortunately created a perfect microclimate for moths), a brown ground felt with red and brown felt surface layer that created the design. The surface design was defined with an outline of decorative stitching much of which was still intact. The layering was duplicated by using two layers of needle felting a brown ground with the surface layer following the original colouring and design.

Matching the variations in the colouring of the surface felt was achieved by using multiple colours of roving fibres in each area loosely carded together so as not to over blend thus avoiding the uniformity of colouration.

The Brown ground was attached to the support fabric at an angle so that it lay underneath the existing felt at the edges of holes. These areas were often thin due to the way in which the moths had attacked the felt. This process built up the thickness and density to that of the original.

The use of needle felting meant that I could be very precise in the positioning of the fibres. For this reason the technique of needle felting was more appropriate than the result wet felting could have achieved. It meant that the unevenness of the holes could be filled rather than just the general shape that would have to have been cut out of a piece of wet felted textile. An added benefit of using needle felting rather than wet felting was that it is generally a quicker process which also helped keep the costs down.

Use of support fabric

I decided to use a support fabric underneath the areas of damage to which the in-filled areas were attached; this enabled me to create reversible repairs attached to the support fabric whilst not affecting the original felt surrounding the holes. The alternative option was to attach the infill to the surrounding areas; a fantastically successful process used by Heleen Klopper to darn moth damaged jumpers and other textiles, but which does not sit well with the ethics of conservation as it would pierce the original textile.

Isolated support and lining was provided as the structure of the rest of the textile was sound.

The areas surrounding the damage were couched onto the support fabric in order to offer strength. Decorative stitching was replaced where missing which also provided strength as it travelled through the original textile, in-fills and support following the original stitching line.

The surface of the felt was vulnerable where fibres were becoming loose through age and the use the textile had received on the floor. It was advised that in future the textile was used on display only, ideally hung on the wall. However the client wanted to place the rug back on the floor, though with little wear. 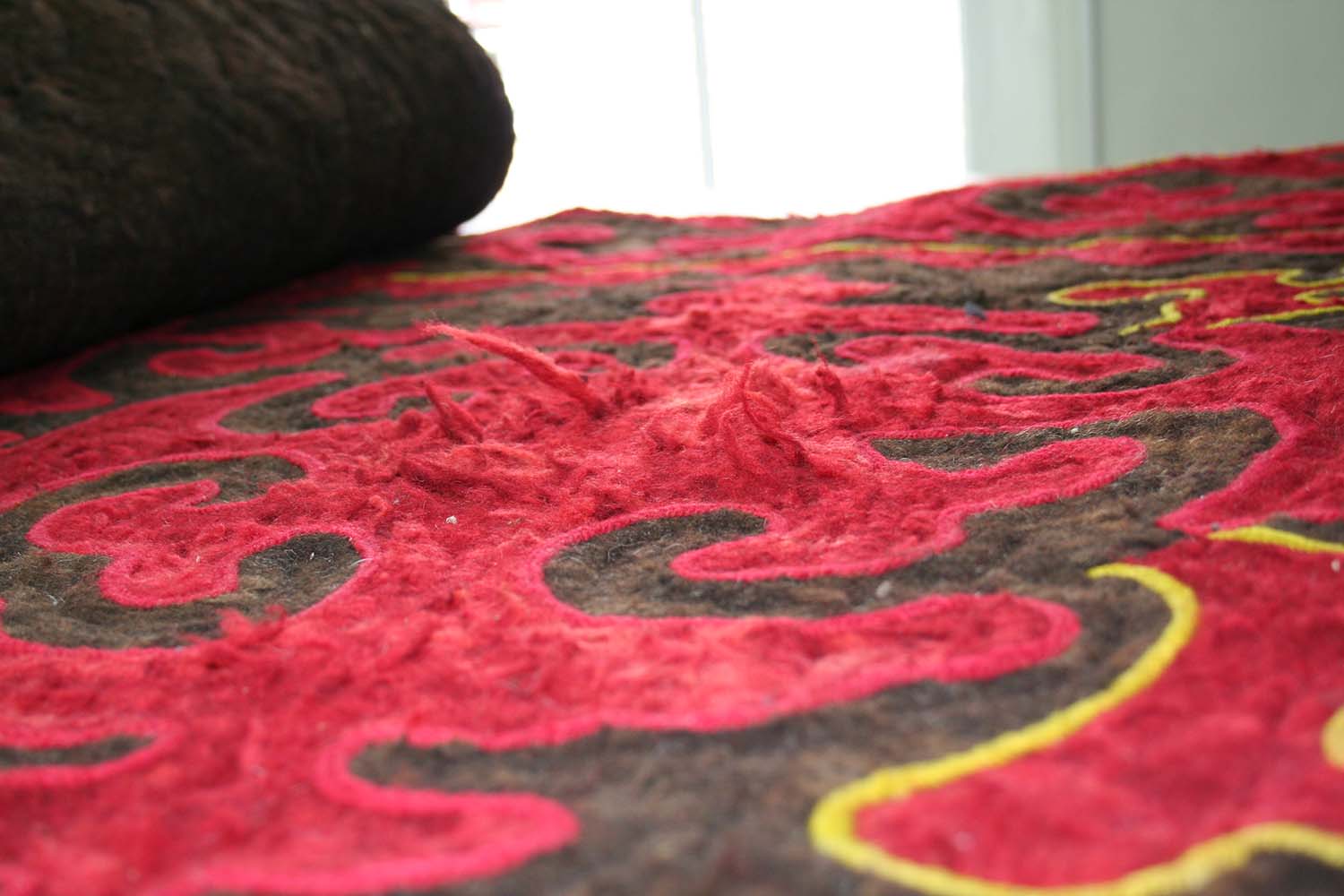 In order to prevent the loss of the loose surface threads a net trapping was considered to cover the entire surface. This however was going to alter the appearance of the textile considerably and was outside the client’s budget.

Following trials I discovered that minimal needle felting over the entire surface would entangle the loose threads preventing their loss. Although this affected the original textile by piercing the felt, it was decided the benefits of catching down the loose threads outweighed this, particularly as the amount of needling required was so minimal.

The results of the repair proved highly successful in offering strength and visual integrity to the Felt. The stability of the in-fills and surrounding areas was good and the aesthetics of the textile dramatically improved.

Mrs Clarke was thrilled with the result and although the felt has remained in use as a rug on the floor it will receive very little wear, so that it can be enjoyed for many years to come. 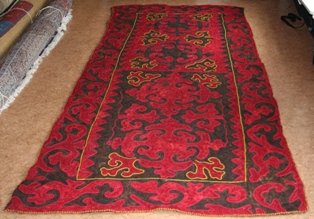 back to all case studies
Next Case Study